Home » From Garage To Greater Things

Here at Luminar we love to celebrate a milestone. This month, our Production Coordinator, and very first employee, Brendan Roberge, notches up 10 years with the company. To celebrate, we thought we’d ask him a few questions about his experience with us over the years working hard behind the scenes. 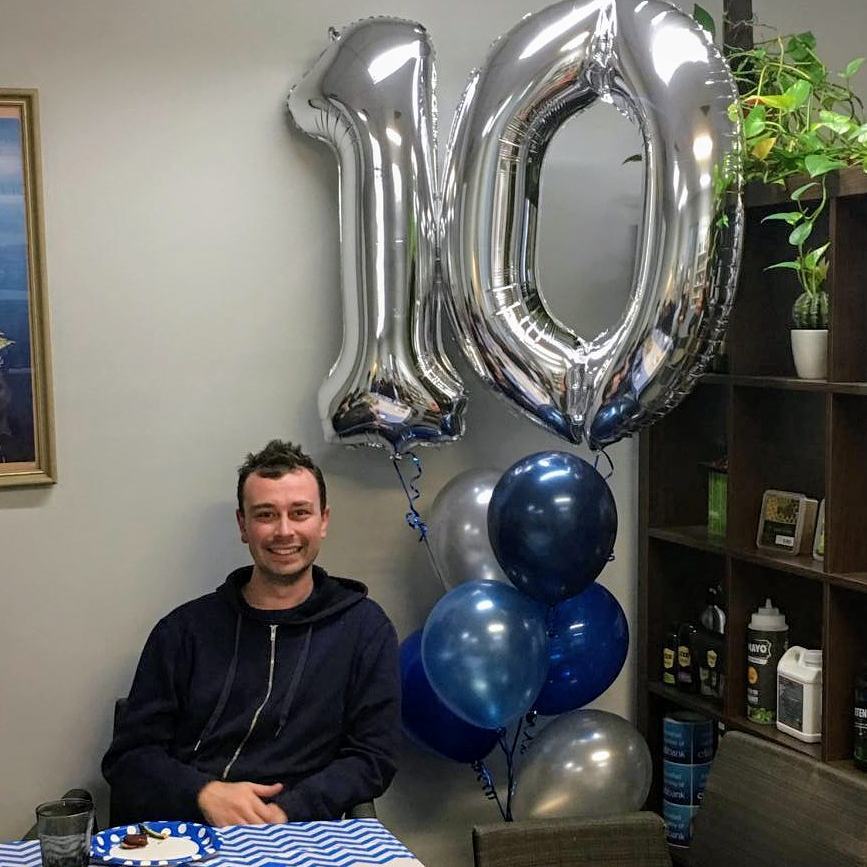 “I never imagined the company would grow as it has done. We have almost 15 employees now, and we’re a big player in the market.” Brendan Roberge reflects on 10 years with Luminar.

What did you want to be when you grew up?

I really had no idea but, as a teenager, I knew I wanted to do some kind of trade.

Where were you working before joining Luminar?

My first job was with another printing company. My uncle worked as a delivery driver at the time and happened to be dropping off a paper delivery to the printing company. He got talking to the owner and heard they were looking for an apprentice. I got the job the next week. While I was working at that company I also studied graphic arts at Ultimo TAFE.

How did you come to work for Luminar?

By the age of 24, I was ready for a change. One day I was sitting in the office at work and a guy called Mike Ellis, the owner of Luminar – a company we did trade business with – was there. We got chatting and he mentioned that he needed someone to help him.

The next week, I had an interview with Mike and his wife Michelle in their dining room surrounded by 30 or 40 boxes of printing jobs. It turned out they were working from their garage which amazed me. Just before I started, Mike and Michelle moved their operations to a small factory and that’s where I started as their first employee working as a flexographic printer.

What were your thoughts in those early weeks?

I felt quite confident as I knew that Mike was well-regarded in the industry. However, I never imagined the company would grow as it has done. We have almost 15 employees now, and we’re a big player in the market.

What’s been the biggest change at Luminar over the past 10 years?

Probably the technology, including two large purchases. In 2007, the year I started, Mike and Michelle bought an Alpha Flexographic Machine. It was a huge investment at the time but it helped us increase our capabilities and hit new markets.

The biggest change, however, came with the purchase of an HP Indigo printer in 2013. It enabled us to really push the digital market because not many other printers were able to do so at the time, and I reckon it doubled the company.

What’s the highlight of your 10 years with the company?

Being promoted to Production Coordinator in February this year. It’s a real stepping stone to seeing what else I could be capable of doing. Who knows, maybe one day I could even be General Manager. But, in the meantime I’m happy where I am as long as I’m doing my best.

What’s the best thing about your current role?

My team members. The best thing about working here is the people. Everyone’s friendly and pulls together as a team.  I love my job and approach it as if the company were my own. If things don’t turn out right, I accept responsibility. It’s a great place to work.

The two people who have changed my life the most are Mike and my colleague, Farai, who was hired after me and shares this 10-year milestone.

I was only a kid when I started here and over the years they’ve really transformed me. I used to have quite a temper, but now I’m more laidback. I’m also inspired by our GM, Matt Ellis, because he’s very effective and entrepreneurial. I aspire to work as effectively as he does.

What’s happening in your life outside of work?

I got married in February and my wife and I bought a piece of land to build a home on in Camden, Western Sydney. After many months looking at display homes on the weekends we finally chose one and should be able to move in next month, which is really exciting.

Short runs: Why it pays to choose a flexible print partner 22 June 2022
How to launch a new flavour 22 June 2022
Digital vs traditional: Who wins in the world of print packaging? 15 April 2022